The Taungurung people occupy much of central Victoria. Our country encompasses the area between the upper reaches of the Goulburn River and its tributaries north of the Dividing Range. From the Campaspe River to Kilmore in the West, eastwards to Mount Beauty, from Benalla in the north down to the top of the Great Dividing Range, our boundaries with other Aboriginal tribes are respected in accordance with traditional laws.

Traditionally, our people lived a hunter/gatherer existence. The various clan groups migrated through their territory dependent upon the seasonal variations of weather and the availability of food.

The Taungurung people are closely affiliated with their neighbouring tribes through language, ceremonies and kinship ties. We are part of an alliance with the five adjoining tribes to form the Kulin Nation.

Other members of the Kulin Nation are the Woiwurrung, Boonwurrung, Wathaurung and Djadjawurrung.

The Taungurung people shared a common bond in moiety affiliation with the other tribes. Their world was divided into two moieties: Bundjil (Wedge Tail Eagle) and Waang (Crow). Members of the tribe identified with one or the other of these moieties and it was their moiety which determined the pattern for marriage between individuals, clans and tribes and transcended local allegiances by obliging clan members to find spouses from some distant clan of the opposite moiety either within or outside their Wurrung (language group).

The nature of the Taungurung people enabled us to utilise the resources available in our vast country. Our ancestors had an intimate knowledge of their environment and were able to sustain the ecology of each region and exploit the food available.

A staple plant food was the Mirnong (Yam Daisy) which provided a reliable source of carbohydrate. Other plants such as the Bracken Fern (food and medicine), the Tree Fern, Kangaroo Apple and Cherry Balert were a valuable food source and can still be seen growing on Taungurung country today.

Dhulangi (Stringy Bark) was used to construct Yilam (Shelters) or to weave binak (Baskets). Fibrous plants, such as Dulim (Tussock Grass) produced Burrdi-am (Twine) for Garrtgirrk (Nets) while other tree species were utilised for their timber to fashion Malga (Shield), Gudjerron (Clubs), Wanggim (Boomerangs). Daanak (Water Carriers) and Gorong (Canoes). The rich resources of the permanent rivers, creeks, tributaries and associated floodplains enabled Taungurung to people to access an abundance of fish and other wildlife. Fish were speared and trapped while water birds were netted and Marram (Kangaroo), Goorbil (Koala), and Barramul (Emu) provided nourishing food.

The pelts from the Walert (Native Possum) were sewn together to form Gugra (Cloak ideal for the cold and wet conditions. Plants such as Karradjong provided fibres to weave Garrtgirrk (Nets) for harvesting the nutritious Debera (Bogong Moth). In the summer the Taungurung people would travel south for the Debera season and then head back northwards when the weather cooled.

Taungurung People currently identify with five of the fifteen clan groups. Some families have an allocated part of country that they talk for and represent, which is roughly based on the territory associated with each clan before European settlement.

Other Taungurung members and families do not identify with a particular area or clan, but with the country as a whole. In areas that are not associated with one of the family groups, we see ourselves collectively as custodians, with a duty to care for and maintain those areas.

When Europeans first settled the region in the early 1800s, the area was already occupied by Taungurung people. From that time, life for Taungurung people in central Victoria changed dramatically and was severely disrupted by the early establishment and expansion of European settlement. Traditional society broke down with the first settler’s arrival and soon after, Aboriginal mortality rates soared as a result of conflict, introduced diseases, denial of access to traditional foods and medicines.

At various times, Aboriginal settlements were established in the area by missionaries and governments at Mitchellstown, Acheron and Coranderrk. These however, despite relative success, were eventually dissolved through various government policies.

Taungurung and other members of the Kulin nation were deeply impacted by the dictates of the various government assimilation and integration policies. Today, the descendants of the Taungurung Clans form a strong and vibrant community. Descendants from five of the original clan groups meet regularly at Camp Jungai – an ancestral ceremonial site.

Elders assist with the instruction of younger generations in culture, history, and language and furthering of their knowledge and appreciation of their heritage as the rightful custodians of the Taungurung lands in Central Victoria. Evidence of scar trees, rock shelters, rock art, and even place names all indicate that Taungurung people have been in this part of Victoria for thousands of years.

Many Taungurung people still live on their country and participate widely in the community as Cultural Heritage Advisors, Land Management Officers, artists and educators, and are a ready source of knowledge concerning the Taungurung people from the central areas of Victoria.

We are pleased to welcome you to our country – to enjoy the landscapes, the flora and fauna. Taungurung people will continue to care for this country and welcome those who share a similar respect. 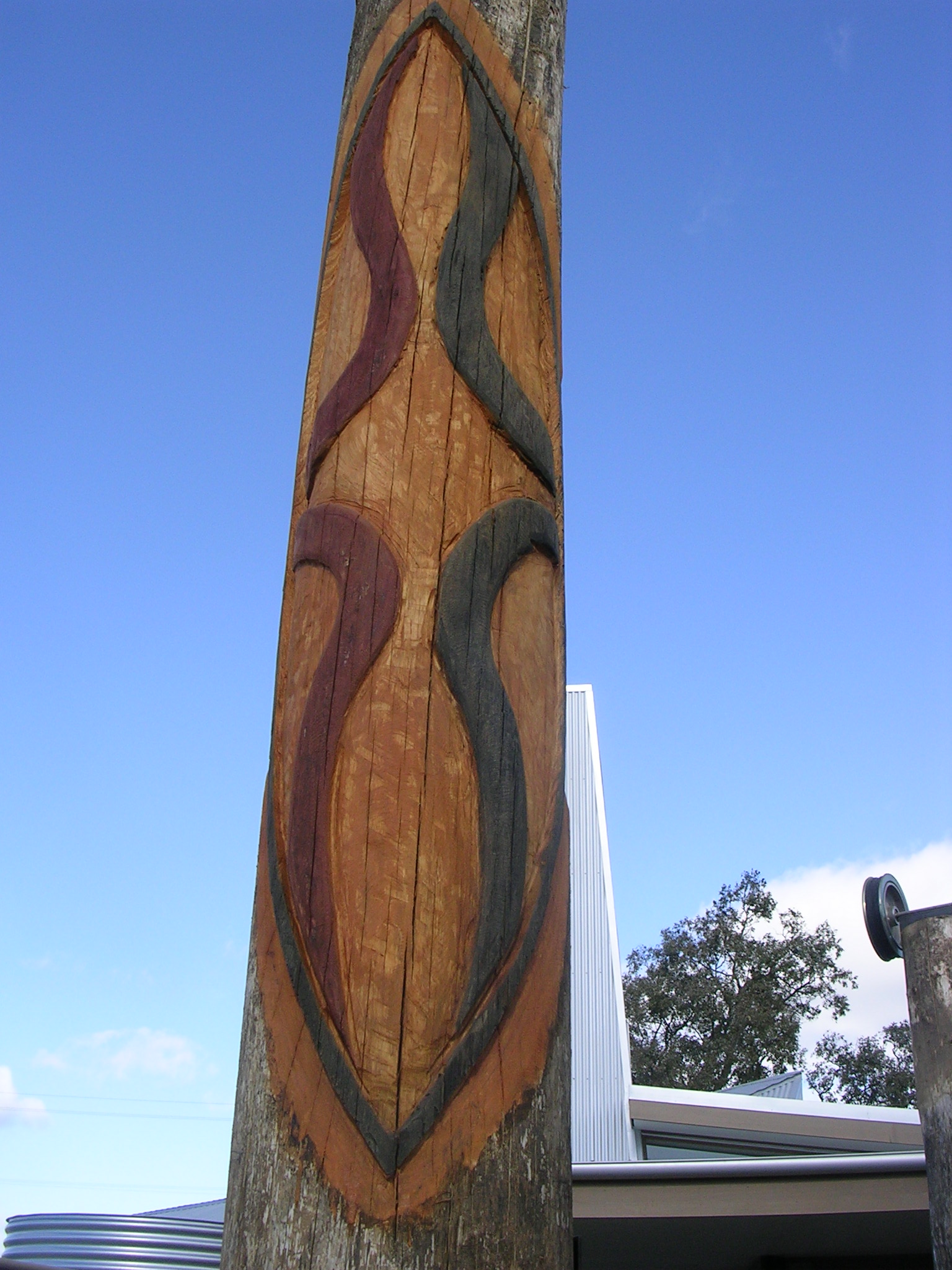 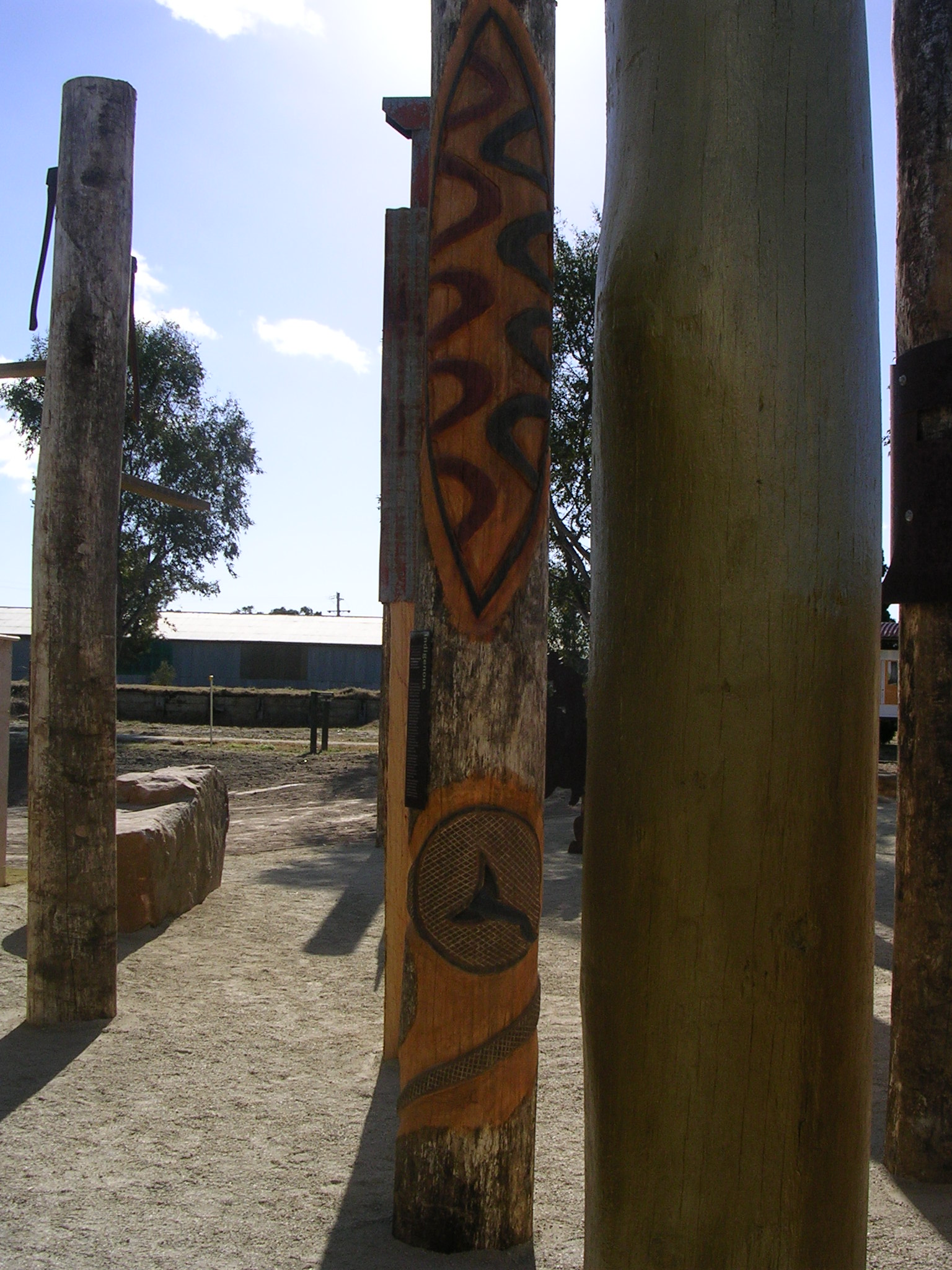 “The moiety totems of the Taungurung people are Bundjil (Wedged Tailed Eagle) and Waang (Crow). Bundjil is the creator spirit of the people of the Kulin Nation: he carved figures from bark and breathed life into them: Waang was often seen as a trickster.”

This totem pole stands at the Mansfield Visitor Information Centre. It was created in 2008 by a group of Taungurung traditional owners including, Uncle Ernie Innes, Michael Harding, Glen Innes, Tandy Annuscheit, and Joshua Innes. The totem pole features three elements: the eel trap, Bundjil and Waang shield, and the 9 clan shield, which signify important aspects of Taungurung culture.

The story of the carvings by Taungurung traditional owner Michael Harding

The reason I’m showing you the different moieties/skin groups is in traditional times before European people came here these were the way in which our old people organised marriages. It is a paternal society that works something like this. The Elders of any particular clan would get together and organise marriage and a Bundjil clan person could only marry a Waang clan person, and the women of either of these groups went to the man’s clan country to live (if she was from a Bundjil clan, she would marry a man from Waang clan and go to his clan country). The shield on the opposite side represents the wings of both of these birds with Bundjil having red wings and Waang having black wings.

The Eel trap was made by the late Aunty Joyce Moate who was a basket maker for most of her life and this depiction of one of her pieces of work is a dedication to her as this is her clan area. Aunty Joyce has passed on her knowledge to many Taungurung women so that the tradition lives on with our women today. Lastly this is a story that we share with you as we are the First People of the Rivers and Mountains in this area.